Gloucestershire hosts many of the loveliest looking villages in the Cotswolds. One might therefore assume that its capital, Gloucester, would look even better than the sum of its parts. One would be wrong.

When I stepped out of the station, my initial thought was that the train had changed direction and landed me in Slough. If there was an award for worst impression upon unsuspecting travellers, Gloucester would be sure to be nominated. Walking up towards the town centre did not really improve my mood or feelings. Between large ugly buildings, unkempt areas, shopping centres that were old fashion even before they were built and sad looking squares, the only thing that got my attention was a roast pig sandwich in the street market. Come on Emma, I urged myself, you can’t go back and write the best thing about Gloucester was roast pig sandwich.

Fortunately, the little bit of general culture I possess directed me towards the cathedral and there, I had an epiphany. From the outside, the cathedral looks like many other gothic cathedrals of the same time. Imposing, intricate, made of spires and tainted glass and a little intimidating. When I entered I looked briefly around and thought that it was Notre Dame’s distant little cousin, nice but no more. I even considered not buying the £3 photo permit. Then I opened the door towards the cloister and tramped over two older women saying grace, a baby and a nun in order to get that permit.

Altogether I spent longer inside the cathedral than in Gloucester. It is a truly marvelous piece of architecture, not at all Notre Dame’s distant little cousin but the head of the family. Each of the numerous chapels have their own atmosphere, their own history and stained glass from all ages. Numerous kings and knights rest there, among which, my mum will have me say, my ancestor Robert the Second duke of Normandy and son of Guillaume le conquérant. She can prove the ancestry too. The devil finds things to do for idle retired hands, isn’t that the saying?

So many things took my breath away in this cathedral I might as well have been running a marathon. Among them is the beautifully sculpted cloister, the central stained glass, the view from the cloister’s garden, the modern stained glass panels, the oriental chapel and the fact that I didn’t know multi-storey cathedrals existed. My pictures don’t do this place justice. If you have the time and inclination, this is a must see. Just close your eyes on the way there and back. 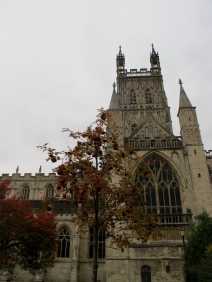 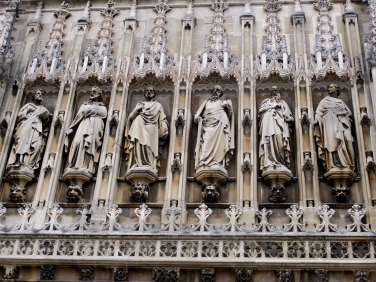 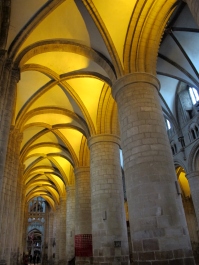 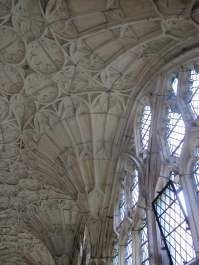 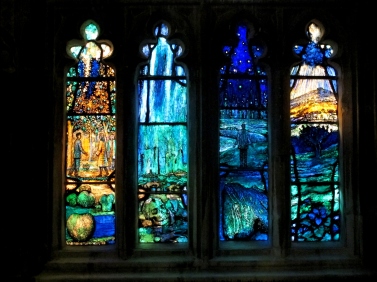