It is impossible to have a blog on the Cotswolds without mentioning Bibury. The village used to feature on nearly every postcard of the Cotswolds before the Internet took over the industry (yes, I am that old, I used to send postcards!). It is easy to see why.

The infamous Arlington Row, a medieval building (from 1380) where wool used to be stored and transformed in the 18th century into weavers cottages, is one of these places that seems to have stopped both the time and hordes of tourists in their tracks. 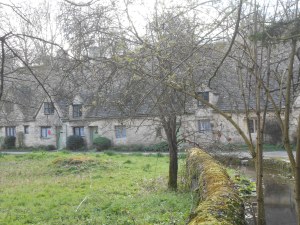 If it weren’t for a bright yellow sports car parked just outside and photobombing the place, you might believe that anybody from the Pillars of the Earth might step outside, or jumping a few centuries and shires Ross Poldark might, but I digress, no idea why.

On a serious note, if you are visiting or planning to visit the region, this is one of the must see places. The village is small but oh so pretty with the river Coln running in the middle of it and wild land remaining wild in front of Arlington Row. For a culinary souvenir, it is also possible to fish at one of the oldest trout farms of the country or simply feed the trouts.

The village also has that particularity of remaining pretty whatever the weather conditions. I have seen it in the sun, the rain, the fog, I have seen pictures of it under a blanket of snow and it remains as strikingly beautiful as the young maiden in the eyes of her beloved, at least before they marry.

The only difficulty, as with everywhere in the Cotswolds, is access. If renting a car is not an option, it is possible to find organised tours from Oxford. It would be a pity to miss Bibury as it is a little diamond in the Cotswolds crown.