Let me take responsibility for my ignorance here dear reader but other than the name and a vague association with poetry I had no idea who William Blake was, which is why seeing a major exhibition was dedicated to him at the Ashmolean (after Cézanne and Tutankhamun no less) got me intrigued.

I decided to go and see the exhibition on a whim, during my lunchtime, without looking him up any further and this turned out to be a good thing as, had I looked him up, I would have learnt that Blake (1757-1827) was indeed a poet but also a printmaker rather than a painter and not being a big fan of prints, I would surely have given the exhibition a miss.

This however, would have been another mistake. Past the initial shock that I was not going to find any painting there, I let myself being sucked into Blake’s dark and disturbing world. Blake also pioneered new printing techniques that allowed him to add movement and colour to his prints. This indeed gives dimension to them and made me think of the raw and meaty portraits Bacon would paint a century later.

As an Arts student, Blake followed anatomy lessons and it is still very present in his fantasy world of tormented souls and bodies. I was also pleased to see that the exhibition was about the artist and not the poet as I never see the interest in displaying only pages and manuscripts in a museum.

I found the exhibition pleasant and easy to follow as works were exhibited in chronological order. There was also a lot of items on display and the exhibition gives a good idea of the kind of artist he was whilst being clear and concise about the techniques of printmaking. The only downside is the low lighting, which forces people to lean so close to the descriptive labels it makes the walls of the museum look like the Western Wall in Jerusalem.

All in all this is a good exhibition to see. If you are interested in Blake, it is thorough and has many interesting pieces and if you are not so well acquainted with him, it is a good introduction to his works and to his world. 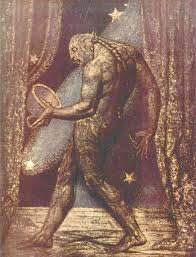