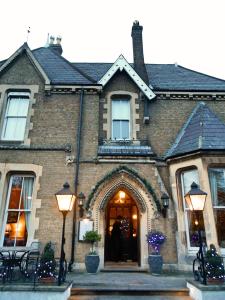 As I said in my post on my Christmas dinner 1, working for two schools is a bit like being a kid with divorced parents and for Christmas that means two family gatherings and two sets of gifts. My first outing took place at the Ashmolean Dining Room and could be compared to receiving the ultimate Barbie doll. With the Cotswolds Lodge Hotel, was I about to unwrap Barbie’s carriage and pony or tante Augustine’s hand knitted jumper?

First of all, I had wanted to go the Cotswolds Lodge for ages, having heard many good things about its Restaurant 66 A but I had never dared as I have to say it intimidated the humble teacher out of me. On entering my fears were confirmed somehow as the staff had more manners than Carson from Downton Abbey and the setting looked as if Cath Kidston and Crabtree and Evelyn had decided to have kids. However, nobody does quaint like the English and the place does convey that old fashioned charm with an understated luxury that is very endearing.

The food, ladies and gentlemen, was the best surprise of all. I have been to many good restaurants in and around Oxford but this one is undoubtedly one of the best I have eaten in, certainly the best of the ones who cook English food. There is usually something wrong even in good restaurants: the potatoes are too hard in the middle, the vegetable are not seasoned, the salad has no dressing, the crème brûlée is not caramelised enough… you know what I mean.

At the Cotswolds Lodge however, everything was perfect from start to finish. I had a starter of salmon pâté on sour bread which had just the right balance of strength: strong enough to make me believe the salmon in it had seen the sea, but with none of the pungency that usually screams cheap. This was followed by a turkey paupiette or turkey with pork stuffing in plain English and there again, it hit the perfect note for me. The meat was tender and the flavours in it reminded me of a ballet rather than the boxing match I have tasted in other stuffed meats over here. This could easily have been a stuffed poultry served at a French table on Christmas Eve. The Brussel sprouts, carrots, roast potatoes and red cabbage were all beautifully cooked and worked as a team to complement the danseurs étoiles without overshadowing them.

I chose the panna cota as a desert, which was flavoured with pistachio and served with shortbread and jelly. I’m not sure I totally get the idea of the jelly to accompany the panna cotta, which was itself slightly jellied but they all looked as nice together as they tasted nice separately. Once more subtle flavours and exquisite taste were on the menu. I left the table full and yet making mental notes of when I would return and with whom.

Looking at their menu online also revealed the prices are on par with any other gastro pub and upmarket restaurant of the region, making Restaurant 66A a restaurant of exceptional value. It is only 15 min from the city centre so don’t miss it if you want to taste the best of British.

Just as a child who cannot chose between their mum and dad, I would say that I preferred the Ashmolean Dining Room as a venue but food wise, the Cotswolds Lodge wins hands down as my palate felt like all its Chrismases had come together. 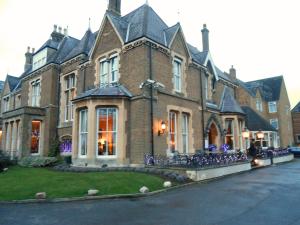 One thought on “Christmas work dinner 2: the Cotswolds Lodge Hotel”